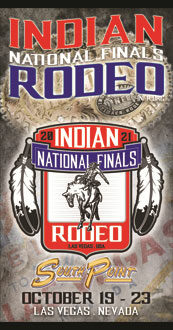 In 1976, five people gathered to put a concept to reality. They united several regional Indian Rodeo Associations from the U.S. and Canada to form the Indian National Finals Rodeo Inc. (INFR). Champion Indian cowboys and cowgirls came together at the Salt Palace in Salt Lake City, UT to compete against each other in the first ever Indian National Finals Rodeo.
Contestants compete for over $1,000,000 in prize money and awards throughout the year, which culminates with the Indian National Finals Rodeo, where 350+ qualified contestants compete in the 8 major events. There were 75 Tribes represented at this year’s event. The majority of the INFR members are also members of Professional Rodeo Cowboys Association (PRCA).