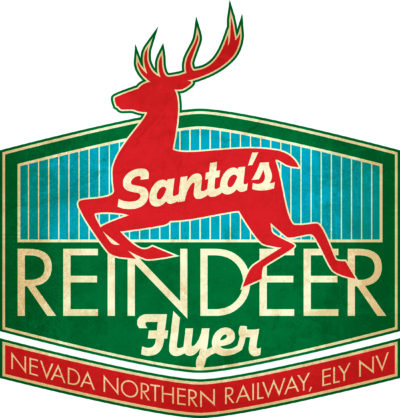 The Nevada Northern Railway Museum celebrates the holiday season with a fantastic adventure for kids of all ages! A trip to the North Pole on Santa’s Reindeer Flyer Christmas Train, to see the jolly old elf himself.

This magical family adventure departs from Ely, Nevada for a magical adventure to the North Pole on board a train and runs on the weekends between Thanksgiving to Christmas.

On the journey northward, you will meet a lively bunch of Santa’s helpers who will serve all of the passengers hot chocolate cookies. They will also lead everyone in singing the holiday favorites that we all know and love. Of course, photo-ops are plentiful along the way, so bring your camera and dress the part, if you like. And yes, pajamas are very much in style on this family train ride

Then it happens! That magic moment when the train arrives at the North Pole! Waiting for the train is Santa Claus himself! Santa will board the train and personally talk to every passenger on the train. He also has a special gift for everyone so they can always remember their Christmas train ride on Santa’s Reindeer Flyer.

Santa’s Elves are honored that Children’s Christmas Train Ride has been voted as the “Best Special Event in Rural Nevada” by readers of Nevada Magazine.