Tuscarora’s cemetery provides intriguing glimpses of life in and around Tuscarora since the discovery in 1867. 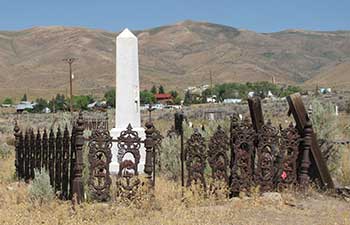 The Curieux, the Packers, the Van Normans, the Pattanis, all in their quiet rows.

Guitardo Pattani died young in 1902. He was out with a couple of his cousins rounding up strayed horses, and he climbed a power pole to get a good look out over the rumpled landscape.

“Hey, Guitardo,” one of the boys yelled up at him, “I dare you to touch the wire!” 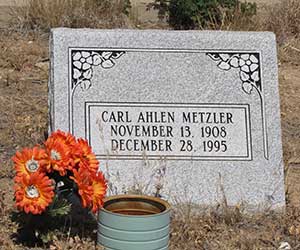 Over in a brushy corner of the cemetery lies Carl Metzler, an old cowboy when he died in 1995. He walked with a limp he’d acquired in 1940, during a visit to San Francisco.

He’d caught the Powell Street cable car down to the turntable at Market, walked into the big bank on the corner, and robbed it: just pulled out a pistol and demanded money! But he got shot in the leg instead, and hobbled back outside just in time to make his bloody getaway on an outbound cable car heading up to Nob Hill.

After serving his time in Alcatraz, he came back to Tuscarora and went back to cowboying, but with the limp. 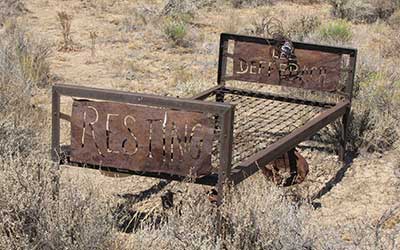 Most of the graves, monuments, markers and memorials are in traditional style, but some of the more recent entries suggest the current character of the place and its artful inhabitants.

That of early Tuscarora artist named Lee Deffenbach, for example, who departed in 2005. She came in the 1960s from Salt Lake City, and encouraged the potter Dennis Parks to emigrate here as well. Her grave marker is a rusting metal bed. Her name is at its head, and at its foot is a metal note: “Resting”.