Gardnerville is a farm town established in 1879 at a more conveniently central location than Genoa. 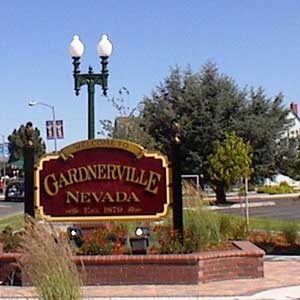 It has spread north and south along US 395 over recent years, and has become the pleasant setting for a collection of cafes and shops appealing to travelers as well as local folks.

Only a few years ago its picturesque Basque restaurants provided Gardnerville with such fame as it enjoyed beyond the confines of the Carson Valley. Here, as in many of northern Nevada’s small towns, Basques operated several boarding-house hotels where the sheepherders could stay between jobs or for a vacation.

Other townsfolk came to appreciate the hearty, modestly priced suppers served at these workingmen’s hotels, and dining out at the JT has become a treat. Skip the Rob Roys and the Coors Lites and have a Picon Punch while you’re here. It’s traditional.

There’s one less of the old Basque hotels now; the Overland has passed out of the hands of the family that had run it for 50 years. Its menu is now contemporary-eclectic but you can still get a superb picon punch at the bar. Sharkey’s Casino is another tradition that has been modernized. The venerable property was sold a few years ago, and the wonderful memorabilia collections auctioned off. But the new owners have maintained and even enhanced the deservedly famous Sharkey’s prime rib, as good as ever. There are many more choices for good food in Gardnerville, with three supermarkets and a Grocery Outlet on the south end of town.

Eagles and Agriculture in Carson Valley